The Abondoned Mount Aetna Tram or Skyride is located in Raccoon Mountain caverns and campground in Chattanooga, Tennessee. Just about 2 miles from I 24. It’s proximity Makes it very convenient to visit all the attractions in the Vicinity of Chattanooga. It Has all the amenities for RV camping and beautiful scenery of raccoon mountain and lookout mountain. But this place has more than that, it has a very long history.
It became a major attraction in 1931 when known cave explorer Leo Lambert discovered a cavern here. YES…. The same Leo Lambert that discovered the famous Ruby falls on lookout mountain. But that’s another video.. Within a few years it became very popular and they opened a campground on the same property as well, and in 1964 they built a tramway and a large, glass-enclosed building by the entrance of the Cave.
This is where our story gets interesting…… The tram ride went 2,800 feet to the top of Mount Aetna (that’s what that area of Raccoon Mountain is called). At the top, a replica of a native American Village was built “Living Creek Indian Village” for entertainment along with trails that people could enjoy not to mention the great scenery of the valley and lookout mountain, it must have been stunning from the summit. Around ¾ of a million dollars was invested for the attraction. But In less than 2 years from the opening date the bottom tram station was completely destroyed by a fire and the night watchman named Willie Cowan perished. The tram ride reopened after a few months of rebuilding, with a much smaller Station, the same one we see today. During the 1970s the tram would be very busy bringing Hang Gliding sportsmen to the top of Mt Aetna and in 1978 new owners renamed the attraction Raccoon Mountain Caverns and Campground, But, the tram had to be taken out of service in 1984 due to the increasing insurance premiums. All that survives today are the cable towers that can still be seen in the trees up the side of the mountain and the bottom station with all the machinery intact with the cable sticking out of the station where the tram would start its journey up the mountain and return with its passengers. Believe it or not!! the tram is still here, abandoned to the side for years and just recently repainted for everyone to admire. And now you know, the rest of the story.. #raccoonmountaintn #lostattractions #raccoonmountaincavernscampground
INFORMATION COMPILED FROM: TIMES FREE PRESS ARTICLE RELEASED on July 25, 2002 – by Harmon Jolley
Plans were announced in 1964 to build a tramway and large, glass-enclosed building at the entrance to Crystal Cave. The cave had been open to tourists since 1931, and developers were hoping that the new attraction would appeal to travelers on the new Interstate-24 nearby. The tram would take passengers 2,800 feet to the top of Mount Aetna (a portion of Raccoon Mountain). At the summit, a Creek Indian village was to be replicated.Tourists could hike along nature trails and gaze at vistas, such as Lookout Mountain and downtown. before making the return trip. An estimated $750,000 was invested in the business venture. The sky tram had not been in operation very long before tragedy struck. On Nov. 30, 1966, the lower transit station caught fire and was destroyed. A night watchman, Willie Cowan, died in the blaze. It took several months for the tram to be returned to operation. A smaller A-frame transit station, which still stands, was built in place of the original building. In 1968, plans were announced for a swinging bridge to be built at the top of the mountain across a ravine, but this was not pursued. When the sport of hang gliding gained popularity in the late 1970’s, the tram transported enthusiasts to the top of the mountain. In 1978, the owners renamed the attraction “Raccoon Mountain Caverns and Campground,” using the more common name for the mountain. The tram was taken out of service in 1984 due to insurance costs, and remains parked at the transit station.
A trio of aging towers marks the path the “Mount Aetna Skyride” tram took to the top of the mountain. The Skyride – opened in 1964 as part of Crystal Caverns – took visitors to the “Living Creek Indian Village.” 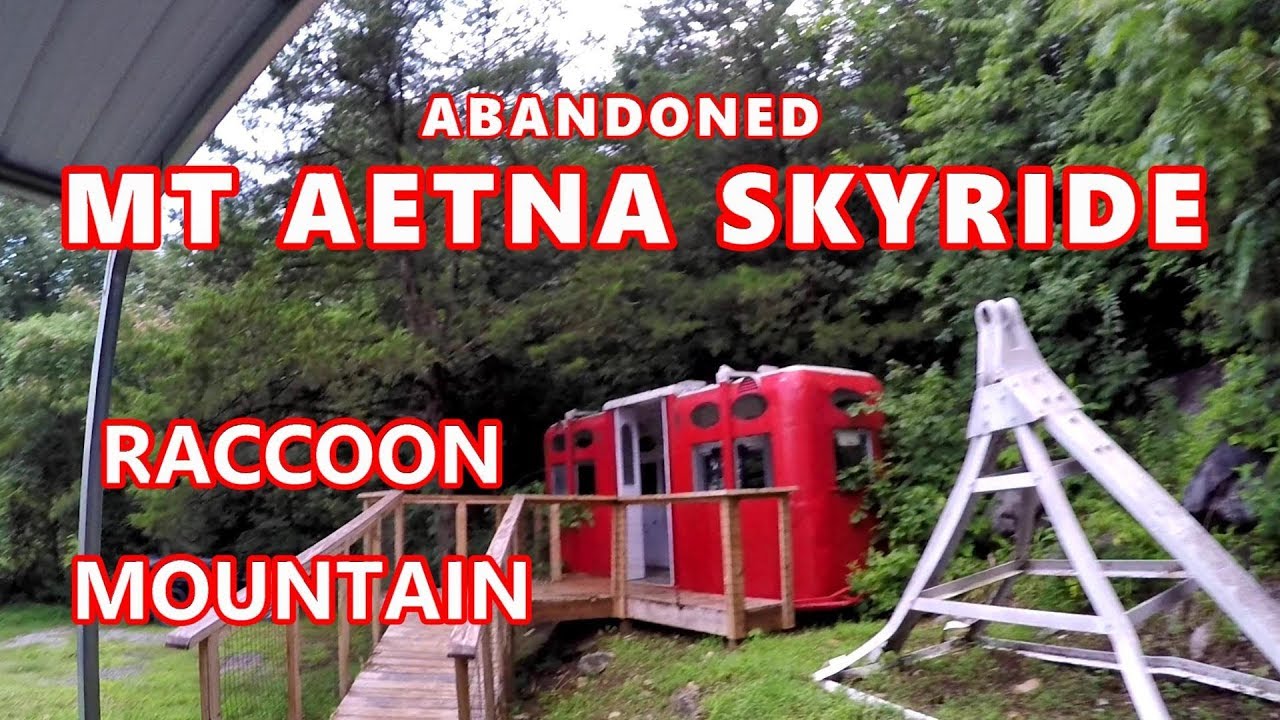