On the 27/5/19 i took a trip to Lake District for a day of Hike-a-biking the Nan Bield Loop .
Joining me was Adam (@Servinscouse) Ali (@Alibobness) and Paul (@Paulharrisonmtb)
We all drove down the night before (after a day of testing Ebikes at Gisburn Forest for the YT Demo day) and stayed in Adam and Pauls vans so we could be up early for a full day of Hike-a-Bike.
The weather forcast was looking ok for the day with only a couple of rain showers forecast.

Up early, Breakfast made and bikes sorted we headed out on the Nan Bield Pass. straight away we where into some hike-a-bike, mainly pushing and nothing to strenuous to start with. After a good 30-40 mins pushing (with a few spots of pedalling) we reached our first stopping point – a beautiful lake situated about half way up.
After the Lake came the hard part, the true Hike-a-bike!
Bikes on the back and one foot in front of the other we slowly marched our way up to the top. quick pit stop to refuel and we were off on our first descent!

As it turned out the first descent was also the hardest. And with no warm up to ease us in it was all or nothing straight away – which for me turned out to be ‘nothing’ as I had a major crash over the bars about 30 seconds in and then another 30 seconds after that!
Being sketchy and uneven seemed to be the theme of the day for me as I just couldn’t find my flow and get into a rhythm!

After the first descent was another VERY large climb around the valley and back up the other side. The going was easier but much longer than the first climb with no bikes on our backs but a lot of pushing.

At the top we took another pit stop before our final non stop descent that would take us all the way back to the vans.

All in all and despite everyone having a few tumbles it was an amazing day out on the bikes and defiantly worth all the effort in climbing!

This Vlog was captured using my Hero 7 Black and WG2 Gimbal. 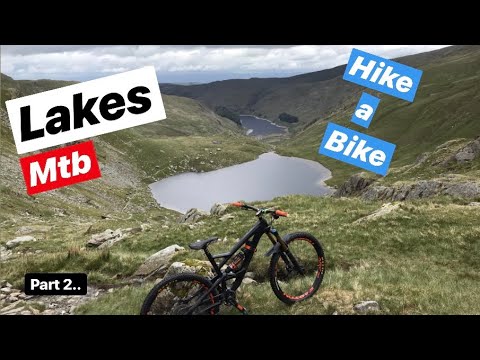